You need a new Android mobile phone. And like most of us, you’d prefer the latest top-of-the-line S-series handset from Samsung. But maybe it’s not the cards financially. So, you’re looking at more affordable alternatives, and your search has brought you to this Samsung Galaxy J7 review.

The Galaxy J7 may be a good fit for your technological and budgetary needs. It’s part of the well-chronicled Galaxy line but comes with a more affordable price tag and a core set of basic features.

And for a phone, isn’t that all we need? Basic connectivity to the outside world? If this describes your hopes for your mobile phone, the Samsung Galaxy J7 may be for you.

What’s in Our Galaxy?

The Samsung Galaxy J7 a member of the now-legendary Galaxy series of mobile phones, which helped make the company a household name as a prime competitor to the Apple iPhone.

But long before the Galaxy came on the scene, Samsung was a very different company, with a rich history that pre-dates World War II.

Upon its founding in 1938, Samsung was — believe it or not — a grocery store. According to Lifewire, the company sold products such as Korean fish and vegetables and noodles and distributed them around the city of its founding.

But led by entrepreneurs, the company over the next few decades expanded into a variety of markets such as textiles, sugar, and wool, as well as white-collar professions such as insurance and securities.

This culture of experimentation eventually led Samsung into the electronics industry, starting in the early 1960s. It became a mobile phone maker around 2000, and a serious competitor in smartphones about 10 years later with the introduction of the Galaxy S.

The S-series is the Galaxy flagship. In contrast, the J-series represents the entry-level Galaxy for budget-conscious customers. (The A-series falls in the middle of the S and the J series.)

Samsung introduced the first J-series phone in December 2013. Different models and updates were added every year between 2015 and 2018.

With that history in mind, it’s time to examine more specifics about the phone itself.

The Galaxy J7 operates on the Android “Marshmallow” operating system. As an Android phone, then, customers use the Google Play Store to download apps, music, and other types of content.

Comparatively speaking, the phone is a little light on memory at 16 gigabytes (GB) on board. But you can also expand it up to 256 GB if you’re a prolific photographer or someone with eclectic playlists that you must always keep on hand.

As an unlocked phone, the Galaxy J7 will work on multiple networks in the United States.

Those are the basics, but the Galaxy J7 offers much more. Keep in mind, as well, that the Galaxy J7 has been updated in successive years. Make sure you’ve got the latest.

Our Samsung Galaxy J7 review would be incomplete without highlighting the display screen. The J7 comes with a 5.5-inch, active-matrix organic light-emitting diode (AMOLED) screen.

OLED screens typically consume less power than standard LCD screens. They also provide a more consistent viewing experience at varying angles of view. That means you can expect more vibrant and more accurate colors for an immersive experience, as well as deeper blacks for clear reading.

The inclusion of an OLED screen on a lightweight, thin device such as the Samsung Galaxy J7 is a differentiator, though screens are continuously improving.

The display is a touch screen and is also replaceable in case the worst happens.

The integration of cameras into mobile phones means we’re able to take more pictures than ever. For most of us, the cell phone is our primary photographic device.

The Samsung Galaxy J7 offers two cameras. The rear-facing camera captures images at a resolution of 8 million pixels (also known as “megapixels.”) A single pixel represents the smallest component of a digital photograph.

Because we live in the selfie generation, you’re probably also wondering about the front camera as you read this Samsung Galaxy J7 review. That camera will capture your selfies at 5 megapixels. That’s an excellent resolution for those spontaneous moments where you want your face in the photo.

The cameras offer various modes. You can also capture video at 30 frames per second.

Battery life may be the most important variable in any mobile phone. The Samsung Galaxy J7 works with a 3,000 mAh lithium-ion battery.

The abbreviation mAh stands for milliampere-hour. It’s an international standard way of measuring the electrical capacity of a battery. Learn more about the term in this article from Android Authority.

But keeping in mind that battery life depends on many variables in real-life use, Samsung says you can count on 40 hours of talk time on a single battery charge in the J7. That number will fall to 24 hours when you factor in usage from texting and talking.

Like many phones, the Samsung Galaxy J7 can also be switched into a power-save mode to extend the battery life at the end of the charge.

The best way to evaluate any product is to listen to the voice of the customer. In this Samsung Galaxy J7 review, the customer speaks loudly. The Galaxy J7 gets a composite rating of 4.2 stars out of 5 from reviewers on Amazon.com.

Reviewers who give the phone a perfect 5-star ranking cited many positives. They felt the phone offered acceptable tradeoffs for the smaller price tag in terms of storage and battery life. They also praised the camera for capturing realistic photos.

Less-positive reviewers reported problems with getting the battery to a full charge. Some customers felt the phone ran slowly when opening apps for use.

How We Reviewed the Galaxy J7

We already know that people around the world love the mobile phone category. Journalists and bloggers do, too.

To compile our Samsung Galaxy J7 review, we consulted a range of sources both from the tech press as well as hobbyists who study the mobile phone field.

Our review draws information from publications such as Engadget, Digital Trends, Colour My Living, the Android Guys, and the Mobile Fun blog out of the United Kingdom. We also considered the review from PC Magazine.

To cross-check our findings, we also looked at customer reviews, not only on Amazon but on the Samsung U.S. site.

Our focus in developing this Samsung Galaxy J7 review was to provide a broad and unbiased look at how this phone can meet your needs for talking, texting, and apps.

Considering Alternatives to the J7

Samsung, Apple, and other phone manufacturers might not like to hear it, but there is life outside the Galaxy S, the iPhone X, and other top-of-the-line phones.

To round out our Samsung Galaxy J7 review, we researched and compiled a few options that are potentially worth considering.

In selecting our alternatives, we focused on finding phones with similar specifications and tried to offer choices similar in price. The idea is to give you a range of options to fit your needs.

Here’s a brief look at some of the competitors to the Galaxy J7.

The Motorola G6 Android phone is billed as “universally unlocked” — meaning that it will work on any U.S. mobile phone network. That was enough to merit including it in our Samsung Galaxy J7 review.

The G6 offers a 5.7-inch high-definition screen that offers “edge-to-edge” views — no letter-boxing around the screen image. The screen resolution is 1080p, which is just a bit higher than the Galaxy J7.

Another advantage that might not jump out at you: The screen consists of Corning Gorilla Glass, which has become the state-of-the-art in mobile phones.

Like the Galaxy J7, the Motorola phone includes front and rear cameras. Actually, at the rear, you get two cameras — capturing images at 12 megapixels and 5 megapixels, respectively. The front camera will snap images at 8 megapixels.

You can buy the Motorola G6 with either 32 GB or 64 GB of memory — in line with the memory specifications of the Galaxy J7.

The battery specs are also identical. The G6 works on a lithium-ion 3,000 mAh battery, which the company says will provide all-day use.

Amazon customers appreciate the phone, giving it a composite rating of 4.0 stars out of 5. Positive reviewers found the phone to be plenty fast and very easy to use — one 5.0-star reviewer liked its “practical, functional features.”

Unhappy customers reported some difficulties in sound reception and the reliability of the phone’s connections to Wi-Fi networks.

The Google Pixel mobile phone line has gotten great reviews. The Pixel 3a is Google’s attempt to open the features of the Pixel to a broader part of the market. It’s another good alternative to consider as part of our Samsung Galaxy J7 review.

The Google Pixel 3a offers 64GB of on-board memory, but the most exciting feature lies in the battery. Google describes the battery as “fast-charging” — contending that you can get 7 hours of use from just 15 minutes of charging.

If you’re like us, you’ll also be intrigued by the battery because it offers some aspects of artificial intelligence. It learns which apps you use the most and powers down the ones you use the least. Google promises three years of updates to the Android operating system with the phone.

The phone’s screen is similar to the Samsung Galaxy J7 at 5.6 inches on the diagonal. It is also an OLED screen for lower power consumption and more consistent viewing angles.

Reviewers on Amazon give the Google Pixel 3a a composite rating of 4.3 stars out of 5. Enthused customers rave about the quality of the camera and the pictures it produces. They are also delighted with the battery life. 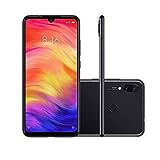 Let’s state this upfront: The Xiaomi Redmi Note 7 is not related in any way to the Samsung Galaxy Note. It does, however, offer similar types of specifications without the same kind of highly publicized risk.

The Redmi Note provides a sizeable 6.3-inch diagonal HD display screen. That’s almost a full inch bigger than the Samsung Galaxy J7. It’s also made of Corning Gorilla Glass, so you’ll be protected from (most) untimely dings and drops.

If you enjoy taking pictures, this phone has plenty to offer. The rear camera captures images at a resolution of 48 megapixels. It has a second rear camera at 5 megapixels used to provide depth to photos.

The battery in the Redmi Note is more powerful than the one in the Galaxy J7 at 4,000 mAh. You’ll also go around with a bit more memory at 64GB.

Though very much a copycat phone, we think the features here more than merit your consideration as an alternative in our Samsung Galaxy J7 review.

The Redmi Note gets excellent reviews from customers. Reviewers give the phone a composite rating of 4.4 stars out of 5.

Positive customers say the camera has the feel of a more expensive model. They also praise the performance of the camera and battery life.

Less-pleased reviewers report problems with receiving calls. One reviewer noted that he was subject to random ads appearing on his screen.

Living in the Galaxy

One thing we can state for sure in this Samsung Galaxy J7 review: There is no shortage of options for your next mobile phone.

Whether the Galaxy J7 is for you will depend on your personal needs for the use of the phone. Are you someone who likes to have the latest and greatest technology? Are you a massive picture-taker? Do you love using lots of apps?

Then the Galaxy J7 may not be for you. However, if you’re looking for basic connectivity — the ability to talk and text and use apps for directions and other practical purposes — you can save yourself a few dollars.

All that said, the options are plentiful. Identify your needs, scan the market, and we’re sure you’ll find a phone that’s right for you.