Elon Musk is a genius, there’s no doubt about it. After he built Tesla brand and got unbelievable demand for Tesla’s latest model, Tesla model 3, his other company SpaceX succeeded to land a rocket on a drone ship placed in the middle of the ocean, a feat that is extremely difficult to accomplish.

Landing from the chase plane pic.twitter.com/2Q5qCaPq9P

This is the first successful landing; previous four resulted in rocket explosions. Although this may seem like a mundane thing to accomplish, especially if we account the fact that previous four attempts were failures, this is a major breakthrough in space flight. Landing a rocket on a ship that’s moving has an extremely small landing area (at least for space flight standards) and is generally a microscopic target to lock the rocket on, is extremely hard. No one ever accomplished that, and as Elon Musk said in one of its Twitter posts “Definitely harder to land on a ship. Similar to an aircraft carrier vs land: much smaller target area, that’s also translating & rotating.”

The possibilities are endless, at least with SpaceX 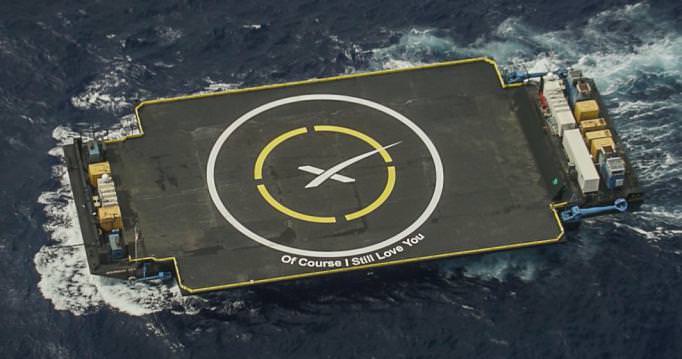 Drone Ship On Which Rocket Landed – Image Courtesy Of SpaceX

SpaceX already landed a rocket, but that was a landing on a stable ground. So, why they just land all their rockets on a ground target? Well, you see, that’s not really an option because when the rocket is moving at a high velocity (and most of SpaceX missions require that) there is a high chance that there will be not enough fuel left in the rocket during the landing, making it impossible to land in on a stable ground. Ships are much more suited for that, they can move and be placed in a place that’s much closer to the rocket’s path, and if something goes wrong and rocket explodes, it is better to explode in the middle of the sea than somewhere on land. And after all, a ship is mobile so even if rocket’s downward orbit changes, it can adjust for that change and move, allowing the rocket to land safely. As Elon said “As mentioned before, ship landings are needed for high-velocity missions. Altitude & distance don’t mean much for orbit. All about speed.”

This landing means that the first part of building a reusable rocket that can be used more than once is finished. Now, SpaceX just needs to work on making repairs and generally refurbishments cheaper, because the current cost of repairs that have to be completed in order for the rocket to be in a flight state again is just too high. Nevertheless, it is extremely exciting to see that someone is developing the next generation of spaceships, which will be much cheaper to launch, allowing more space flights to be performed.

We are living in an exciting time, and will attend the revolution of space flight, maybe even the first manned mission to our nearest planet, Mars. Good Job Elon, keep it that way and maybe in a couple of decades we’ll actually send astronauts to other planets, a dream that all mankind should strive for.

More iPhones to be Build in India by Wistron