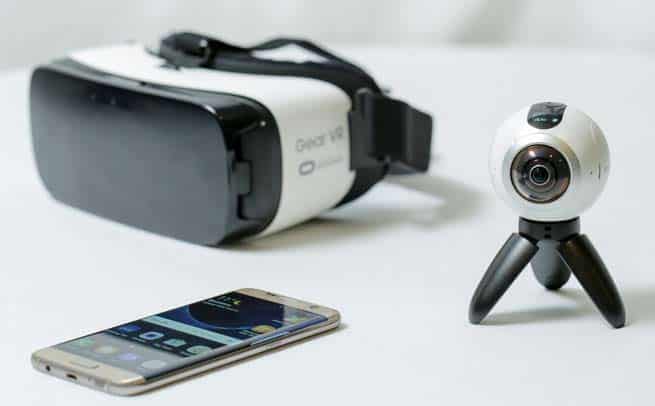 In today’s review of Samsung Gear 360, I would like to point out that photography and videography have traveled a great distance since digital cameras came into existence. 3D video filming is still an attraction but somewhat flailing one. VR tech is even newer but comparatively more hyped. So let’s see how capturing spherical scenes really looks like.

Samsung Gear 360 Review: How it Works, Usage, and Options 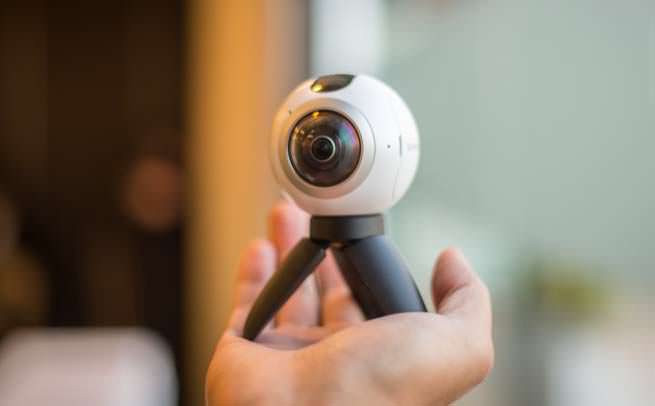 There are 2 fisheye lenses on either side of the camera cover the entire 360 scene. Once you have captured the footage, the images/videos are still raw and can’t be directly viewed unless they are treated with a process called ‘stitching.’

Basically, stitching means combining different images to create a large image. Since only two cameras are involved here, Samsung Gear 360 stitches only two images. It can be done through its desktop or smartphone app but there’s a catch: on smartphones, you can only do it with a latest Samsung phone or Windows on the desktop. These limitations definitely limit the appeal.

There are advanced options as well which are also easier to learn but most of you stick to the default settings. A multipurpose button loop through three different modes: Shooting, Settings, and Power on/off. You hit start recording with a signature red-rec-button located on the top.

As an inherent outcome of new-tech-new-vices, you can share 360 photos online on the very limited platform. Currently, Facebook 360 is your best option for social media presence of your three-sixty ventures. 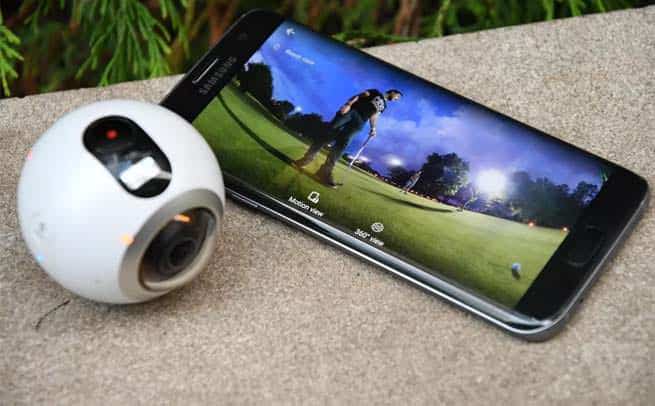 The performance of Samsung Gear 360 is better on the photos than the video. The video recording is smooth but it has multiple issues with transferring. Just a five-minute spherical clip recorded the Samsung Gear 360 takes over 10 minutes to transfer to your phone.

The worse thing isn’t even the transfer time; it is the transfer failure because it is definitely not a single attempt process. So make sure your smartphone battery is fully charged and don’t move the phone if transferring over Bluetooth.

You should also know that even if you wish to clip the footage, you have to move the file to the stitching software first. Overheating is also a big problem with first generation Samsung Gear 360. Sometimes, the device will shut down just after 15-minutes of video recording.

The social media giant limits its 360-degree uploads at 1GB. Additionally, you could also experience some spikes and failed attempts uploading it to Facebook. You can share your clips using Samsung’s native app.

But different from the 4k video quality that you are known to. You can shoot 4k videos with it but since the entire image is actually a spread out spherical panorama, the pixels feel diffused and blurrier during the playback. So don’t expect GoPro like quality here… or even smartphone.

You must know that Samsung Gear 360 is still the top consumer-level 360-degree videography and photography device in terms of resolution. So still an achievement; the problem: too novel and not attractive enough to the users like the vibe virtual technology has raked up.

So this experimental camera genre is best suited for… experimenting. If you are a professional photographer of nature and panoramas, this is your best option. Many android phones and iPhone developers are already benefiting from it, creating world-tour like apps.

Things You Should Know About 360 Cameras

Samsung Gear 360 price is $349. Other spherical cameras include 360fly, Kodak LG’s 360 Cam, Ricoh’s Theta S while Nikon has also announced their own version during an electronic show. For now, the company is supposed to benefit on the sales sheet because no other runner in the arena is just as much good. Hopefully, when I will review the next generation of these devices (some company might slide it out by the end of 2017), there will be better features, quality, and durability.

5 Smart Devices You Can Do Without!