Robots are Getting a Sense of Touch 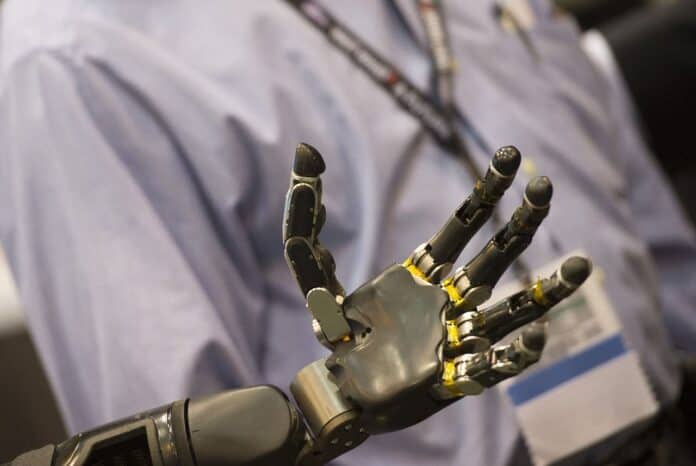 We often take for granted the abilities that we have. Our hands can find and identify objects without us having to look at what we’ve found, or put down a glass filled with liquid, and we could do it without spilling a drop.

These and other similar activities are possible for us because of our sense of touch. However, when it comes to robots, these actions can be difficult, or even impossible to do. That’s because these machines can’t feel their surroundings. They can ‘see’ them by scanning around using multiple tools, but they still can’t feel anything. At least they couldn’t, until now.

The leader of the University of California’s Biomechatronics lab, Veronica Santos, and her team have managed to design a robotic hand that can not only hold things but also feel when to let go of them. These researchers from Los Angeles have demonstrated a new type of robotic arm that can feel, and it uses this new feature when it moves objects around. It can feel when the object (like a box that it’s holding) makes contact with the table, and it’s only then that it decides to let it go.

These mechanical fingers can sense a lot of things that humans can, and that’s possible because of the built-in sensor. These sensors can tell the machine what is it that the fingers are touching. The information that they’re reading include objects movement, fluid pressure, and even it’s temperature. All of this makes robots gentle and more sensitive, which is one of the more popular of the research areas in robotics.

This field of research leaves a lot of space for imagination and creativity when it comes to personalization of robots. For example, Cornell University’s researchers from New York have also made a robot, and theirs that can tell when the tomatoes are fully grown.

Cornell’s professor of engineering, Robert Shepherd, has said that this tech costs even less than high-tech electronic skin. The sense of touch for this robot comes from the light that’s shining through the rubber skin on the robot’s hand.

There are also scientists in China, from the Harbin Institute of Technology that have created a special type of artificial skin. This skin has electronic hairs built into it, and these are being used for feeling pressure, just like the human hairs can. They can even detect objects that are as soft as a tissue.

As we can see, the research related to allowing robots the ability to feel is advancing rapidly. Next objective for the researchers is adding the sense of touch to artificial limbs, like legs, and arms.