For many people Facebook and Facebook Messenger mobile apps are completely unnecessary bloatware; all they do is killing your battery, using up all your processing resources and making your smartphone sluggish and unresponsive at times. The worst thing about this is that with every update Facebook makes, apps become even more power-hungry, bug-infected and larger in size.

The usual way of dealing with these two horrendous apps is just deleting them and using Facebook mobile site, but soon that won’t be possible. Let’s face it, most of us are using Facebook almost exclusively because of messaging, and for now you can get that by going to the mobile site and using messaging there. No lag, no battery drainage, no problem. Yes, messaging part of the Facebook mobile site is pretty limited; it offers users just simple text messaging capability, but that should be enough for 95 percent of the users. But now, it seems that Facebook doesn’t want to use messages this way. It seems that they want to make you a slave of its messenger app.

A notice being shown to users tells them that “Your conversations are moving to Messenger,” and that “Soon you’ll only be able to view your messages from Messenger.” This isn’t the way a company promising to connect the whole world should behave. Stripping users from the freedom of choice isn’t the way to make them like you. There are numerous reasons why this move is wrong. 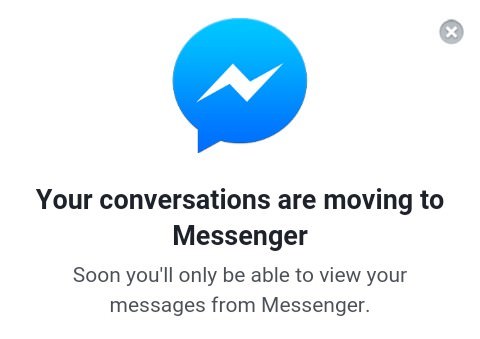 First, if you want to strip users of a freedom of choice, at least make their sole choice one that’s usable and friendly to them. At this moment, both Facebook and Messenger aren’t user (or smartphone) friendly. They suck up your mobile data, constantly running in the background using up too much RAM and processor power. And their hunger for battery power is just ridiculous; Just by removing these two apps, you’ll get approximately twenty percent longer battery life. Not to talk about how your phone will finally breathe like it should once you remove Facebook and Messenger. Really illogical moves taken by the company which has a single goal of connecting the entire world.

The Damnation Of Being In Poor Signal Area

Most of you will recognize this kind of situation. You’re in the middle of nowhere  and want to text with someone or just check up your wall. Well, if using official apps that won’t happen; they eat too much data, making them utterly unusable when cellular signal is of subpar quality. Well, the usual way of resolving this is by visiting the mobile site; it is much more optimized that apps, enabling you to check your profile even in areas where wi-fi is absent and where even 3G signal is out of the picture.

For some people, the only way of using Facebook is Facebook Lite app, it works in poor signal areas and is using much less mobile data and messaging works inside the app! But, as always, it isn’t available to all, it is geo-restricted and not available in most western countries. So, basically, Mark and his crew showed that they can make an app that’s optimized, uses much less data, and is equipped with messaging ability, but they don’t want to make it available to everyone. Another shot in its own leg move by Facebook.

It’s simple, if using the mobile site, Facebook can’t make money on you. You won’t be seeing all of those annoying ads, there are no chat bots, no promotions, etc. In other words, Facebook can’t let you enjoy an ad-free experience so they’ll strip you out of all alternatives. You’ll be using Messenger, or won’t be able to message people at all. If we lived in some perfect society where users really can change something there will be a massive boycott of the biggest social network and all of its services, but since most people will just bitch about it for a couple of days, and then install Messenger, Facebook (and all the other big companies) will win, again, like when they introduced a new a new wall feed, or like when they completely ruined Instagram’s user interface. Oh well, you  all have a couple more months to get used to Messenger-exclusive chat. For now, it just warns you, by the end of the summer, it will become your only way of chatting with people on Facebook while on a smartphone. Get used to it, it will only get worse.

NASA and Seti Need Your Help to Find a Name for...